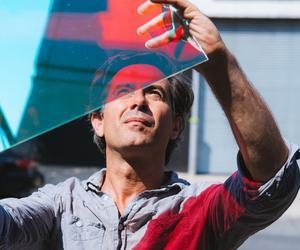 As Stephen Dean was on his way back to the studio after a quick stop at the Outsider Art Fair last week, Artsy caught up with the artist to hear about his current show at Ameringer | McEnery | Yohe—comprised of a series of huge crossword puzzles, dotted meticulously with color. These works are counterposed to a set of smaller drawings on Chinese calligraphy paper, where glass-head pins punctuate evenly spaced intersections. In his sculptures, videos, and works on paper, Dean often approaches color with a scientific perspective. But what’s clear from our conversation is that the psychological and spiritual histories of color weigh equally in his mind as he works. Using the tools of the laboratory and drawing inspiration from the microscopic to the prehistoric, Dean’s work celebrates the relationship between saturated color, transparency, and light.

Ian Epstein: How did you first start on these huge “Crossword” pieces?

SD: I’ve worked with watercolor on existing printed materials like weather maps or “help wanted” ads or even crosswords, but only at the scale of a newspaper before. So the idea stems from something that I’ve been doing for a while and from a desire to really expand spatially. I wanted to take these ideas, but work at an immersive scale. Each piece is close to 7-by-7 feet—it’s almost something that you can walk through. It’s a completely different scale.

IE: Where do you find existing printed matter?

SD: The source material is a combination of two things. The large crosswords are all the same base pattern—and it’s the pattern of the world’s largest crossword puzzle. [He laughs.] It exists! All the black and white is the same structure, and the idea is to work and sculpt around underneath, to work off the grid and the pattern. In general there’s a visual appeal where I see the potential for color to exist, and from there it’s a combination of serendipity and an interest in these visual structures, and I sort of fabricate an image from there.

I used a serial element for the watercolors in the “Crosswords.” I’m pursuing a geometry that’s kind of archaic in one way, and in another way it’s really a very specific geometry.

IE: Can you talk to me a little bit about watercolors—how do you use them? What do you think is its strength as a medium? They seem particularly suited to work about color.

SD: To me a drop of watercolor contains an enormous amount of visual information. It has so much saturation and transparency; a drop of watercolor is really extremely active and rich and full of information. I keep coming back to this idea of shifting from a microscopic to a macroscopic point of view. There are hundreds of thousands of dots in these pieces. They are as much about what they are as about making. At the same time, as they start to become images, they also have a quality of already being an after-image, and, in a way, a non-image. It’s just the sum of these dots; all these things together.

Each individual drop is like a cell, in a way. They are like microorganisms that fabricate this (I don’t know if that’s the right term) ghost image. They have a quality that I was really interested in reaching as this after-image because it relates to our experience of sight and cognition. There is almost a psychological dimension.

IE: Do you work with anything else that’s like watercolor?

There’s a story that always fascinated me about a Cathedral that was destroyed in England—I believe it was maybe in the 16th or 17th century in Winchester. They took all the pieces of glass and redid all the panels of stained glass after Oliver Cromwell destroyed them, but they remade them completely abstract because everything had been destroyed: giant, absolutely gorgeous, luminous, abstract stained glass in the 17th century.

There was a whole religious debate about how to use color and what is color and where does it come from. In this context, I find that story super interesting: the solution to a catastrophe is an image which is not. But to still be able to benefit from making color expressive and functional as an architectural feature in the context of these churches.

IE: Do you do crosswords?

SD: No—I never, ever was able to find a solution to any word or question.

Besides the “Crosswords,” there are also the works on paper where I mark the intersection of the grid with a glass head pin—and that for these works it’s also something textual that’s replaced by a language of color. They both use a different source material and have a different sense of time, in the way that you experience them, sort of how for some languages the intersection of lines in a grid is the active point. The crossword puzzles were painted within the lines that define the boxes, which is sort of the Western way of relating to the grid, so to speak. Maybe like the difference between the game of chess or the game of Go. Both are embodiments of very different kinds of relationships to such a pictorial thing as a grid.

IE: Is there anything that guides your choice of color from one piece to the next? How are you thinking about it in relation to the “Crossword” series?

SD: In layering, there’s a lot of color that gets absorbed, and then at one point about halfway through, say, or at some point, there’s one color that I sort of take forward. That one is going to give the main sense of light and volume and direction. There are cultures that you find throughout the world, for example the Navajo in the United States, that use color to define space. They use color instead of cardinal directions, so instead of describing North, South, East, West—it’s represented by blue or yellow or black or white, and the idea that geographic space was defined by color was really really inspiring to me as I made these works. In general, this idea that color functions as a visual language, as a code. It’s kind of like applying the code to the space. In this case it’s the space that’s defined by the geometry of these crossword puzzles. The way these pieces were constructed was with this idea that color was giving direction—usually it’s light that gives direction in a painting—but this idea that color could be a direction applied from a purely pictorial point was as a very interesting idea.