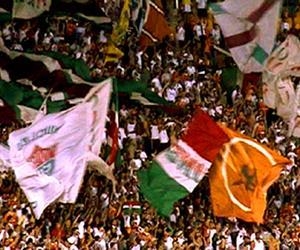 An opportunity for reflecting on sport, a subject of ever-increasing relevance in its anthropological, social, educational, economic and cultural aspects.

Determinant for physical wellbeing, sport is one of the most effective means of stimulating encounters, exchange, passion, enthusiasm and tension.

Via diverse media and with closer or more distant ties through the various historical periods, the relationship between sport and art can be seen throughout the development of western culture. Art now finds in the sporting disciplines a fertile source of cues for reflection on a number of aspects of modern society.

Fair Play focuses on the video idiom used by artists of the latest generation who are breaking all the rules in their search for different narrative, critical or poetical possibilities, playing with and subverting the televisual genres.

The videos are presented all together, visible at a glance in an “open” configuration that while respecting the individuality of each work on show also compiles a collective mosaic of images.