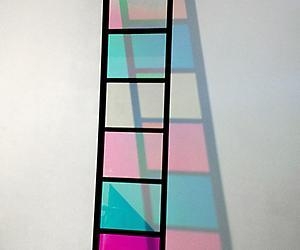 While light has long been associated with the spiritual and metaphysical, Stephen Dean, Ethan Ryman and Jan Tichy emphasize its more phenomenal and psychological qualities. In their work, it is treated analytically—although not without a sense of the poetic—as a means to comprehend and engage with the world.

Stephen Dean (b. 1968, Paris; based in New York) works in a range of media, including video and installations and has long explored color as both pure phenomena and cultural signifier. His works in this exhibition are gorgeously physical manifestations of color in interaction with light, but there are always historical and populist narratives to be gleaned from the often util- itarian structures he so cannily re-purposes. Converting them into abstractions, into updated interpretations of Minimalist objects, his ladders suggest Judd with a nod to Flavin and maybe LeWitt, his postcard racks recall Duchamp’s bottle racks and his appealing, brilliantly reflective sculptural constructs, his Mnemotechnics, conjure up Tatlin’s corner counterreliefs), colorized. Dean has been using modern dichroic glass in his work for quite some time, fascinated by the constant shifts in hue that it produces under different light conditions, its response mercurial and dazzling. A low-tech means of production, it returns enormously rich visual dividends. Determined by the position of the spectator in relationship to the object, by the angle of the light and the angle of viewing, the works are in flux, kinetic, performative, experienced as unpredictable patterns of colors that are temporarily glimpsed, painted on the walls and floors by transient light.