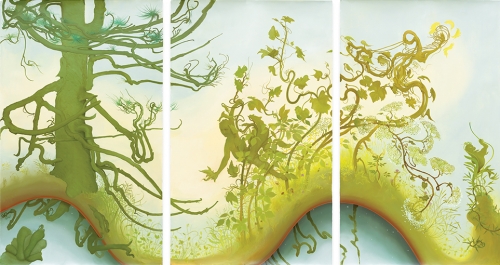 Artist Inka Essenhigh spent the early years of her career thinking that her fluid, feminine paintings were a no-no.

As she painted graceful fairies, ghosts and woodland creatures that played in colorful, mystical universes, her art friends called them lightweight and kitschy.

But the work felt right, so the New York-based artist kept creating.

Her pieces now hang in The Museum of Modern Art in New York, the Smithsonian American Art Museum in Washington, D.C., Richmond’s Virginia Museum of Fine Arts, and the Tate in London. The Drawing Center in New York commissioned Essenhigh to paint a site-specific wall drawing that will be unveiled in April.

The Virginia Museum of Contemporary Art will debut her latest exhibition, “Inka Essenhigh: A Fine Line,” on Friday. MOCA curated the exhibition, which will begin a national tour after a summer stay in Virginia Beach. MOCA’s 23rd annual juried show, “New Waves 2018,” also opens on Friday.

MOCA also has produced Essenhigh’s first monograph, a book of her full-color images and essays by curator Heather Hakimzadeh, who worked on the exhibition, and Alison Byrne, director of exhibitions and education.

Hakimzadeh believed it was time to bring Essenhigh’s work back to MOCA. The artist has become more recognized in the 11 years since the museum included one of her pieces in a 2007 exhibit. The painting was one of the most popular among visitors, Byrne said.

Byrne and Hakimzadeh have been fans of Essenhigh for years and were surprised when they learned the artist hadn’t had a monograph yet. Essenhigh’s professional career goes back to the 1990s.

“We felt it was time,” Hakimzadeh said.

Close to 30 pieces are included in the show, and Hakimzadeh selected a range to highlight Essenhigh’s range of experimentation, from enamel to oil on paper, to her breadth of work from a monoprint to three-paneled pieces in which each canvas zooms 7 feet high.

Essenhigh is known for sinuous, strong lines and her creation of florid plant life and magical characters – thus the title of the show. Many art critics will characterize emotive work as too sentimental.

But “when you dare to experiment, you dare to fail,” Hakimzadeh said. “The quality of her line work is still there.”

Essenhigh always wanted to be an artist. She studied in college in Ohio and then in graduate school in New York. After graduation, she worked at art jobs including doing gold-leaf work for Victoria’s Secret, designing patterns for fabrics and wallpapers.

“Then I started making these silly wallpaper sketches, and I realized it was light and fun,” she said during a phone interview.

She started creating works that tapped into her love of surrealism and of impressionist painters like Edgar Degas. Her characters emerge from trees and flora, their smokelike fingers clasping a glass of wine and dancing in a clearing in the woods.

Even in her urbanscapes, faceless women convey the snark of a high-society gathering.

She is hoping that is what people will feel when they see her work.

“I think being happy is being bold.”