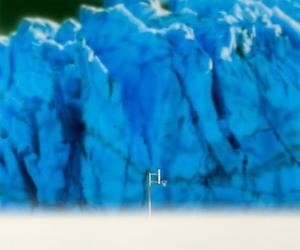 FARGO – Todd Hebert’s techniques are making the art world take a second look at his work.

The Grand Forks painter has been creating a stir in gallery circles for years, but area art patrons are seeing for themselves what all the buzz is about. The North Dakota native’s show, “Todd Hebert: Selected Works 1999-2014” opened at the Plains Art Museum in Fargo in October and remains on display through March 21.

It’s a collection of paintings, but the Dickinson native’s methods are what are leaving a mark on viewers.

Hebert uses both a paintbrush and an airbrush to create images that seem so lifelike, they may appear to be photographs.

He plays with depth of field, focus and different planes for the viewer to examine.

One of the larger paintings, “Dew With Jack o’ Lantern,” depicts a spiderweb in the foreground with detailed pearls of condensation reflecting the blue of the sky above. Behind the net of tiny fibers rests a plastic pumpkin for trick-or-treating, with a mountain range in the background.

While the dewy web is amazingly crisp and sharply in focus, the items in the background are increasingly blurry.

Hebert is not only playing with depth and focus, but also images in context. A spiderweb and jack-o’-lantern may connote Halloween, mystery and darker themes, but by setting these aspects in an afternoon sun, the objects become more benign – they lose any associated preconceptions.

If I put it in stark sunlight and have it a certain tone, if you take that out, that common association and add this afternoon light, it’s being congenial and confrontational at the same time,” Hebert says from his home in Grand Forks, where he teaches art at the University of North Dakota.

A more provocative image is just a few pieces away. “Goose With Windmill” is as sounds, though this time the goose in the foreground is blurry and it’s the large blades and turbines in focus.

The large white windmill is the kind you’d see at a wind farm, and Hebert acknowledges that the piece addresses concerns conservationists have over the impact wind farms will have on migratory birds.

He admits he has some hesitations about being so direct in his work, but sometimes he likes taking it over the top. He refers to a piece on his website, www.toddhebert.com, called “Cooler With a Glacier.” It’s just as it sounds, with a red cooler (perhaps even an Igloo) in the foreground and an icy blue glacier behind it.

I don’t mind that sort of pun happening,” he says.

His work forces you to stand longer than a five-second shuffle,” Plains Art Curator Becky Dunham says, referring to how some museumgoers will stand in front of a work for five seconds before shuffling on to the next piece. “It invites you to look at it up close and so far away.”

Dunham says the show, in the Xcel Energy Gallery, was arranged so that larger pieces were given more space so viewers could take them in from a greater distance, while smaller paintings were hung in the hall.

Dunham first became aware of Hebert in 2008 when she was working at the Museum of Fine Arts in Houston, where his images of snowmen were a big hit.

That regionalism, people are fascinated by,” she says. “You don’t see people clinging to this regional matter that’s in his artwork.”

She says his use of recognizable subjects and playing with how the viewer sees the art makes him unique in the contemporary art scene.

He has a very clear style. Once you see a Todd Hebert, you know a Todd Hebert,” she says. “He developed that style at a young point in his career, and he’s made it his thing throughout. It’s so approachable, so audience-friendly.”

Hebert graduated as an undergrad from UND’s art department in 1996 with a painting emphasis. He went on to study at the Rhode Island School of Design and there started experimenting with using the airbrush, appreciating the watercolor wash look of the airbrush spray.

He wasn’t the only one who liked the look. Galleries took an interest in his work and gave him shows. Art critics weren’t necessarily as excited. One of his first reviews was in the New York Times, but the writer didn’t think the painter’s work was gritty enough to be realism, a term Hebert doesn’t even use for his art, preferring instead “representational.”

Hebert kept working, earning more shows and more critical write-ups, including one East Coast writer who referred to the painter’s “kitsch aspect of the airbrush.”

I can’t believe someone who’s a sophisticate writing is still using ‘airbrush’ and ‘kitsch,’ ” Hebert says.

Art can be made out of anything. Anything goes, right?” he says. “Still, in this contemporary, fine-art world, there’s still a prejudice in some ways about airbrush, which is OK. I guess you need a rub, somehow. It’s better to be written about than not.”

Dunham says there may be some associations with airbrushing as a tool for decorating and not for “serious artists,” but that didn’t stop her from booking Hebert’s show at the Plains. She says the Plains is also looking into buying a piece by Hebert as an emerging star not only in North Dakota, but across the country.

I think what makes it a fine art is how the tool is being used, not what the tool is,” Dunham says. “At the end of the day, it’s his hand that is manipulating that tool. I think he’s helping to elevate that tool. His technique is flawless.”

When: On display through March 21; Hebert will give a talk Feb. 25.