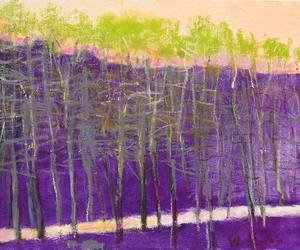 Brattleboro, VT -- Wolf Kahn views himself as a liberator. The contemporary American artist said he aims to bring "landscape painting up to date" by liberating color, being free in his application and just generally trying to be "more modern than most landscape painters are."

And this message of free expression is the basis of a lecture titled "Control and Letting Go," which he plans to deliver at the Brattleboro Museum & Art Center at 7 p.m. today. A book and memorabilia signing will follow. Kahn told the Reformer he typically gives a lecture at the museum once a year and always intends to give guests their money's worth. Reservations are $10 for the general public, $5 for BMAC members, and can be made by calling 802-257-0124, ext. 101, or visiting www.brattleboromuseum.org to reserve online.

Kahn said he wanted to be an artist since he was 5 years old and recalls drawing in the back of his classrooms whenever he got bored as a child.

I'm an 87-year old guy -- it's time to give people courage and freedom," he said Thursday, adding that he celebrated his birthday on Oct. 4. He has spent every summer in Brattleboro since 1968, living the rest of the year in the center of the international arts scene -- New York City.

Kahn was born in Stuttgart, Germany, in 1927 and emigrated to this country by way of England in 1940. He told the Reformer he lived in England for eight months until the United States changed its family reunification laws. He graduated from The High School of Music & Art in New York in 1945 and then served in the U.S. Navy for 13 months. He said he studied with renowned teacher and abstract expressionist painter Hans Hofmann under the GI Bill, later becoming Hofmann's studio assistant. Kahn enrolled in the University of Chicago in 1950 and graduated with a Bachelors of Arts degree the next year. According to the BMAC, Kahn and his other former Hofmann students established the Hansa Gallery, a cooperative gallery where Kahn had his first solo exhibition. In 1956, he joined the Grace Borgenicht Gallery, where he exhibited regularly until 1995. Kahn has also received a Fulbright Scholarship, a John Simon Guggenheim Fellowship and an Award in Art from the Academy of Arts and Letters.

He said he is happy to discuss his experience and past during the question-and-answer portion today, though that is not the focus of his lecture.

BMAC Director Danny Lichtenfeld said he was familiar with Kahn's work before moving to the area and has gotten to know him more through his art over the past 15 years.

Wolf Kahn is a major figure in contemporary American art and he's really a local celebrity here. This is where he has lived half the year, every year, for almost the last 50 years," he said. "As far important artists who have unusual insight and experience into the world of art and who also happen to be right here in our backyard, Wolf is right at the top of the list. It's an honor to showcase him and I am grateful to host him in these talks."

Lichtenfeld said what makes Kahn's work so special is his ties to this area. He said many of the landscapes Kahn has painted or drawn were inspired by Windham County and his work can be seen in galleries, museums and private collections around the world. He also said Kahn is a really funny man.

In an essay accompanying a 2011 exhibit of Kahn's work, BMAC Chief Curator Mara Williams wrote, "His images are palpably about place, and yet they transcend mere description. For more than half a century, this modern master has balanced the sensuous qualities of color and light with a relatively stark geometry of form, giving free reign to complex investigations of perception and of place."