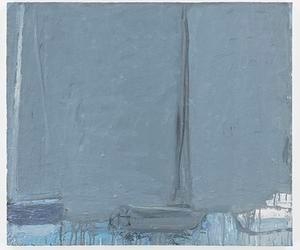 ACME Fine Art is proud to announce the gallery’s Fall exhibition: WOLF KAHN: EARLY WORK.  The exhibition will focus on a single decade of Kahn’s early career, the 1960s. This was an important decade in which Kahn’s work garnered the critical acclaim that helped establish his trajectory towards becoming one of America’s favorite contemporary landscape painters. The exhibition will feature fifteen works—fourteen oil paintings and one pastel—that demonstrate Kahn’s artistic arc during this pivotal decade. Many of the canvases have not been exhibited since the year that they were created. The show will open on Friday, 30 September, and run through 26 November, with an opening reception held Friday, 7 October from 6:00 to 8:00 in the evening.

In 1960, Kahn’s work was featured in the Whitney’s Young America: 30 Painters under 36, a success that was shortly followed by Fullbright and Guggenheim fellowships. The distinct new directions he explored during this time were a sharp departure from his previous work and generated new critical attention. During this period, Kahn summered in Martha’s Vineyard and Maine and traveled to Venice, Rome and Milan. The paintings in ACME’s exhibition track these travels, and feature views of coastal Maine, sailboats off Martha’s Vineyard, and copses and clearings in the Italian countryside. These environments prompted Kahn to develop new ways of approaching color, depicting space, and conveying light. Perhaps: The minimalist and subtle, yet inventive and energetic landscapes that resulted are wholly successful in their own right. When seen from our contemporary vantage point, however, they also offer valuable insight into the genesis of Kahn’s celebrated signature aesthetic.

Wolf Kahn took a serious interest in drawing as early as age four. His talent did not go unnoticed by his family, and at age eleven his grandmother signed him up for private art instruction. After immigrating to the U.S. in 1940, Kahn attended the High School of Music and Art in New York City. Following his graduation from high school in 1945, he studied painting with Stuart Davis at the New School for Social Research in Manhattan. Kahn then went on to study with Hans Hofmann, progressing to become Hofmann’s studio assistant in Provincetown during the summer of 1947. By the 1950s, Kahn found himself at the center of the New York art world. Critics and commentators had placed him among the group of young painters called the “Second Generation New York School,” a name that both indicated their debt to the original New York Abstract Expressionists and their new openness to representation. Kahn’s heavily worked paintings of the period, with their energetic, stacatto brushwork and riotous color were well received by critics. Fairfield Porter wrote in ArtNews (1955) that “the most studied and successful paintings…have a solid weight of color and light in the right place and proportion, making them both heavy and sparkling, miraculously not paradoxical, and more French than Expressionist, with qualities few painters today seem to understand as well as he does.” Frank O’Hara added to this praise, writing that Kahn’s “paintings are very beautiful and very serious; very rich and very sad…he seems to brood over nature at the same time as he represents its exquisite moments.”

By 1956, Kahn’s unique artistic voice was already beginning to evolve. He spent another summer in Provincetown, where, by way of his girlfriend and fellow artist, Emily Mason, he met Milton Avery and his family. While Kahn’s paintings maintained his characteristically deft balance of color, planes in his work began to smooth, brushstrokes elongated and softened, and forms became simpler. While his summer in Provincetown certainly prompted some change, a move to Venice in 1958 was the true catalyst that launched a new evolution in Kahn’s painting.

That winter in Venice, Kahn lived with Mason in a former palazzo ballroom on the Giudecca. The quality of light, the landscape and the water he encountered there were unlike anything he had found in the states. His biographer, Justin Spring, writes: “After painting the garden of Casa Frollo in the warm tones he had used in Provincetown, he observed the beauty of Venice’s shimmering, silvery winter haze, and accordingly his painting began to change. Over the next two years, Kahn worked in a nature-inspired minimalist vocabulary, in which the hazes of Venice—neither fog nor glare, but a cool velvet shimmer—would move him away from chromatic pyrotechnics and thick impasto toward an exceptionally subtle rendering or nearly monochromatic tonal landscapes rendered in a smooth dry stroke.”

When Kahn and Mason moved back to New York in the fall of 1958, Kahn brought his evolving visual vocabulary with him to paint the landscapes of Martha’s Vineyard and Maine, trying, as he recalls, to find “new ways of dealing with monotone.”  ACME Fine Art’s upcoming exhibition will include six paintings from these forays, in which Kahn pairs his new subtle tonalities with a painterly vocabulary not inconsistent with his association with Hofmann and the expressionists of the day. The impressive Sailboat in the Summer’s Heat is an almost entirely white painting, with slight shifts in warmth and tint that indicate whether the sun’s glaring light is striking the white sail and prow, or the water below.  In Sails Near Sprucehead Maine, the palette is comprised of the same subdued, grayed blues and greens that dominated Kahn’s minimalist Venetian landscapes of just a few years before. Now, however, the restrained colors and tonal shifts are energized with expressive, varied brushstrokes, and the drips and accidents of action painting. Kahn said of his paintings of these years: “I was using the language of abstract painting to play my own games.”

In 1962, Kahn received a Fullbright Fellowship and returned to Italy, this time residing in Milan, Viterbo and Rome. Justin Spring described Kahn’s paintings of that year as “cerebral”: they play visual games with the observer. One can see the old Hofmann concept of “push-pull” come back into play in one painting from this period titled Cypress Rows, as Kahn harnesses shifts in tonality and color to create the recession of space between the frontal cypress trees that push forward toward the observer. All this dynamism is held within a palette of dimly gray blues, greens and cleverly placed white.

When the Kahns returned from Italy, they again spent a summer in Martha’s Vineyard, and then, with a Guggenheim Fellowship, took their family to Deer Island the subsequent year. Kahn remembered the changes in location again instigating the evolution of his painting: “I began to let the color come through on my canvases…How far could I go towards color without giving up tonalism?” The resulting images of sailboats in the ponds and harbors of Martha’s Vineyard that Kahn completed at the end of the 1960s form the rest of the exhibition at ACME Fine Art. Sailboats were a long time fascination of Kahn’s, who referred to them as “isolated visions of scale.” His depictions of the vessels from the late Sixties synthesize his prior decades of painting; color creeps back in, restrained and modulated by subtle tonal shifts. Overall, the landscapes maintain a minimalist approach to composition: the horizon is pushed almost to the bottom of the painting with the majority of the canvas devoted to a deep and heavily worked sky. Sunset Harbor, a delicately colorful painting from 1968 demonstrates the beginning of Kahn’s “love affair with purple.”

From there Kahn’s paintings would grow into the vibrant banded landscapes and barns for which he is best known today.  Looking back at his work of the midcentury, one can see how Kahn developed the adept sense of color seen today in his joyous landscapes.  The 1960s proved to be an important step in this process: the decade was a successful one for Kahn, whose work of the time was featured in a number of exhibitions and gained him two prestigious fellowships. He was producing some on his most abstract works and with them, he challenged the boundaries of landscape painting and developed sophisticated and subtle color relationships that remain captivating decades later. The upcoming exhibition will provide a chance to look back on this important period, an opportunity that is typically rare during career of a contemporary artist. WOLF KAHN: EARLY WORK will open Friday, 30 September and run through the end of ACME’s Fall season to close on 26 November. An opening reception will be held from 6:00 to 8:00 pm on Friday, 7 October.